On a Jetblue flight from NYC to San Francisco, the Soon-to-be First Daughter Ivanka Trump was confronted by a gay male passenger named Dan Goldstien.

Dan, a Brooklyn employment attorney, was on board with his child and his husband, Matthew Lasner, who tweeted “My husband chasing them down to harass them #banalityofevil”.  When they noticed Ivanka, her husband, and 3 children were “flying commercial”, Dan approached her while holding his child, saying “Your father is ruining the country”. When flight attendants tried to intervene, he asked “Why is she on our flight? She should be flying private”. Both Dan and husband Matthew were booted off the flight. 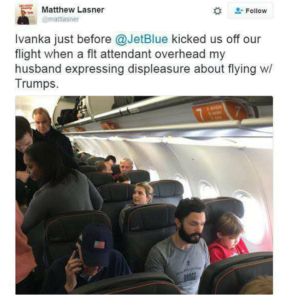 Matthew, a professor at New York’s Hunter College, complained in a tweet “my husband expressed displeasure in a calm tone, JetBlue staff overheard, and they kicked us off the plane”. Matthew has since deleted his twitter.

Matthew’s views of Trump strongly align with his husband’s, as Matthew has participated in anti-Trump rallies during the election, including a #NotMyPresident rally in Chicago. Matthew has also spoken against Trump in interviews, reports Heavy.com:

In a March 2016 interview with AM New York, Lasner said that Trump represents “an ascension of ego, of surface, and of explicitly catering to new wealth,” going on to call him “the Gordon Gekko of developers.” This is a reference to Michael Douglas’ character from the 1987 movie Wall Street, a character defined by his greed and narcissism. His slogan in the movie is “greed is good.”

The two affluent anti-Trump activists couldn’t let the opportunity to tell off a Trump pass them by, but it cost them a flight. Witnesses say Ivanka didn’t respond to the man.

Despite her husband at her side, the mainstream media is reporting as if Ivanka was a damsel in distress. They’re saying she was “accosted”, “berated”, and “attacked”.  Dude didn’t touch her. He just told her how he felt about her father and asked why her privileged ass was on a poor people’s flight.

No word if Ivanka’s husband defended her honor.