Cultural appropriation is defined as the adoption or use of elements of one culture, by members of a different culture. The culture whose elements are adopted is the culture of an oppressed people (i.e. Africans and African Americans). The culture doing the adopting is the culture of a dominant people.  Elements adopted could include religion, fashion trends, language/lingo, and hairstyles. In a sense, elements of the oppressed culture are exploited by the dominant culture for popularity and/or profits.

The Kardashian sisters have become the living definition of cultural appropriation. The sisters often quote rap lyrics in their social media posts, rock hairstyles that originated from Black culture (cornrows, locs, etc.), have famously altered their bodies to mock the physique of Black women (wide hips, full lips, and big butts), date and marry Black men, yet give nothing back to the Black community. 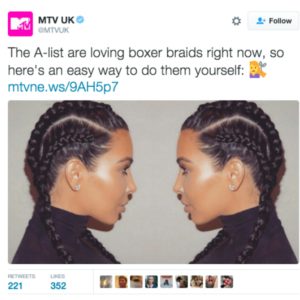 Mainstream media dubbed the Kardashians as trendsetters: Kim Kardashian-West is credited for making curvaceous figures and big butts sexy (despite the Black and Brown women who’ve had it for centuries and were ridiculed and hypersexualized for it). Kim, Kendall and Kylie Jenner are credited for creating the edgy new styles of “bohemian twists” (locs) and “boxer braids” (cornrows), despite the styles being staples of African and African American hair. Elements of Black culture that Black people, particularly Black women, have been ridiculed for are now praised, as long as those elements are on non-Black skin.

See next page for Andrew Schulz thoughts on cultural appropriation.