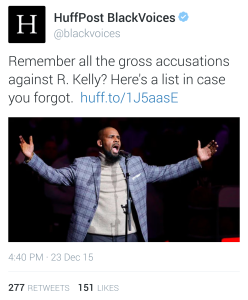 After R.Kelly walked out on his Huff Post Live interview, the people over at Huffington Post did a little digging into his past, and for those not too familiar with R.Kelly’s history, the news is shocking.

R. Kelly walked out of his interview with Huff Post Live after the host correlated Kelly’s past statutory rape allegations to his lack of album sales. Many viewers felt the host attacked R. Kelly on a thirteen year old allegation. As a response, Huffington Post listed all of Kelly’s past sexual affairs with underage girls to show his crimes against underage girls are far more consistent and recent than we’d previously thought. Here is a complete rundown via Huffington Post’s Black Voices:

Huffington Post’s reporter and author of the article, Tyler Kingkade, noted why the public hasn’t reacted to Kelly’s numerous crimes and how he’s been able to get away both legally and socially without regard: because his victims were Black. Kingkade added a personal note from Chicago Sun-Times reporter Jim DeRogatis, who covered R. Kelly’s crimes in 2013 on the judicial system’s disregard of Kelly’s crimes:

“Nobody matters less to our society than young black women. Nobody. They have any complaint about the way they are treated: They are ‘bitches, hos, and gold-diggers,’ plain and simple. Kelly never misbehaved with a single white girl who sued him or that we know of.”