The days of resolving issues with your fiancé over the phone or in a face to face conversation are DEAD! Today’s generation of couples take to social media to break up, make up….and end engagements?

A few days ago, Love & Hip Hop star Erica Mena posted a very personal note to her Instagram page. She stated she’d recently suffered a miscarriage and talked about the pain it caused her. While fans offered kind words and empathized with the reality star, one person was not pleased: her fiancé, Shad Moss, aka Bow Wow: 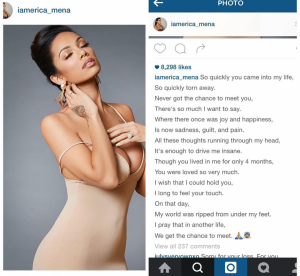 Instead of privately discussing his outrage over the post with Erica, Bow Wow took to social media as well. While driving with a friend at night, Bow Wow recorded himself calling Erica “corny” and “attention seeking”, and said revealing your personal life to the public is one of the lamest things a person could do. He must’ve forgotten Erica was on a reality show? He also called Erica “late” after revealing the miscarriage occurred five months prior to her posting:

Bow Wow recently went on a rant demanding all bloggers to stop talking about him and his fiancé. The rant came after Bow bragged about moving into a mansion next to Diddy and Jimmy Iovine. Bloggers discovered Bow actually lived in a condo. His realtor unknowingly leaked the information and Bow was furious. Despite claiming he hates being the subject of blogs, especially urban blogs, Bow and his fiancé do everything in their power to stay on them. His issue with his fiancé could’ve easily been handled over the phone or in a face to face conversation when he came home to his mansion condo.

Erica has since deleted all of her pictures of Shad Moss off her Instagram page. She also corrected a fan who called her “Mrs. Moss”, and told the fan to call her Ms. “Mena”. Bow responded by posting a picture of himself, his daughter and his daughter’s mother, Joie Chavis, saying he wants to give his daughter the one thing he didn’t have as a child: both parents together: 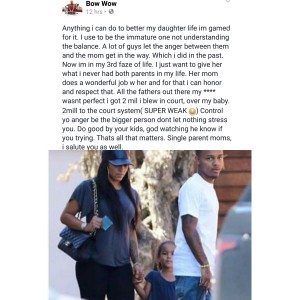 Erica learned to perfect her acting skills while on Love & Hip Hop, so I’m sure they’ll upload some fake reconciliation post on Instagram to go along with their fake breakup. This isn’t the first time Bow has slandered his fiancé online. I’m sure it won’t be the last.