“This is SAD, not amazing. Not brave nor courageous, but SAD.” “His mama named him Bruce, so that’s what I’m going to call him.”” “When Judgement Day comes, I hope I’m nowhere near Bruce’s supporters.”

These are some of the comments under articles and on social media posts about Bruce Jenner. Two days ago, Vanity Fair introduced the world to Caitlyn Jenner, the woman living inside of Bruce Jenner for 65 years. When the news broke earlier this year of his choice to transition, the public was split in threes: those who stood by him, those who stood away from him, and those who otherwise didn’t care for anything relating to the Kardashians. If his announcement proved anything, it showed the lack of humanity in people.

You don’t have to accept Bruce’s decision to transition. You also don’t have to write hateful comments under posts pertaining to him. At the bare minimum the least people can do is be respectful; Respectful of our differences and in the basic human right to live life as freely and happily as one so chooses. Condemning Bruce or any gay, lesbian, bisexual or trans person to Hell won’t place you any closer to God, for only He holds that power. 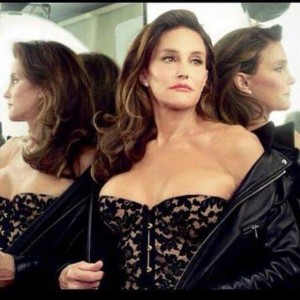 The next few months after the announcement of transitioning, Vanity Fair’s contributing editor Buzz Bissinger followed Jenner around, capturing hundreds of hours of footage of the final stages of Jenner’s transition. Bissinger noted these times were full of both physical and emotional pain for Jenner. Yet, after three months, the fabulous cover appears of Caitlyn Jenner, the woman the world was waiting to see. Though the astounding 22-page interview doesn’t hit stands until next week on June 9th, Tea Served Cold has the excerpts from her interview, including how she picked her name, what her biological kids (the Jenners, not the Kardashians) think of Caitlyn, and how she hopes her mother will react when seeing Caitlyn for the first time. We also have a few encouraging words from celebrities as well as some not so nice words…. 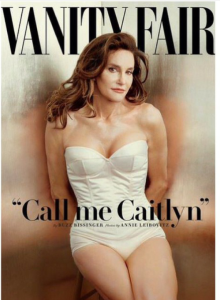 On Choosing the Name ‘Caitlyn’:

“It’s one of the hardest things in life—choosing your own name,” Jenner said. One way she attempted to come up with ideas was by watching the Miss America pageant. She’d survey some of the contestants to get ideas and see if any of them fit. She also liked the names Heather or Cathy. But Caitlyn also stuck out prominently in her mind. When her assistant, Ronda Kamihira, at one point independently suggested Caitlyn, Jenner said, “I love that name, too!” The coincidence helped seal the deal.

With the name itself set, Jenner went back and forth about how it would be spelled, between “k” and “c” as the first letter—no small task in the Jenner/Kardashian family, with its trademark “k” names. Finally, she decided it was best to break tradition, and the media associations that went with it. She settled on “c.”

Even my son, actually, Burt said that to me one time. He goes, “To be honest with you, I think Caitlyn is a lot better person than Bruce.” And I really have to—I think he’s right, because Bruce always had to tell a lie, he was always living that lie, every day, he always had a secret from morning till night. Caitlyn doesn’t have any secrets. 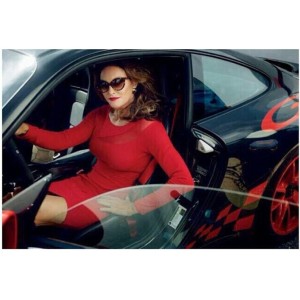 How She Hopes Her Mother Will React Seeing Caitlyn For The First Time:

My mom is, for 89 years old, is extraordinarily open-minded. I’d wonder how her reaction will be, but like most people, it’s all, all the emotions are in the anticipation of meeting you. Once they meet you and they spend five minutes with you, they go, Oh, O.K., I get it, big deal, let’s go on with life. And I think my mom will kind of be the same way, especially if Caitlyn keeps sending planes to pick her up and bring her down.

We had a conversation the other day, we were talking about a lot of things, and, you know, she goes, “You know what, I think I can have a better relationship with Caitlyn than I can with Bruce,” because we’ve always had a little tension in our relationship throughout the years. [. . .] And so when she ends the conversation, she goes, “O.K., good-bye, Caitlyn.” It was very funny, very cute. 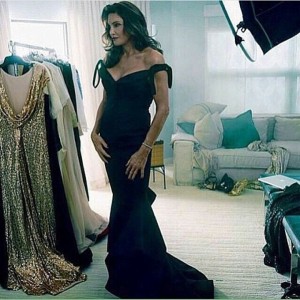 How She Hopes The Older Generations Will React To Her Vanity Fair Spread:

I hope they’re happy for me, O.K.? I hope that they all understand that life is very complicated. That [the gold medalist they remember] was me in 1976, I did that and I am extraordinarily proud of what I was able to accomplish. I make no excuses for it, but that was all of me that did that, it wasn’t just Bruce, it was all the things that—I was a dyslexic kid, I was suffering from gender dysphoria, I had all these other issues in life, but when I latched onto this thing called sports, I probably latched onto it harder than most kids did. Why? Because I needed that.

Never knowing where I was going, but after years and years of playing the game and trying to prove my manhood, you know, next thing I knew I wasn’t trying to make my high-school team anymore, I was trying to be the best in the world at something. And this was my chance to go out there to the world and do something significant. And it became real important to me, and I put so much time and energy and work into this thing, and it was part of me. But it was all part of me: it was the dyslexic kid out there, it was the transgendered kid out there, it was Bruce out there, all these things, all the emotions were all—that’s what made me work so hard, that’s why

I was more determined than anybody else. I went out there and did it. And I am extraordinarily proud of that. It wasn’t all of me, but for that moment, I can say I was the best in the world at that. 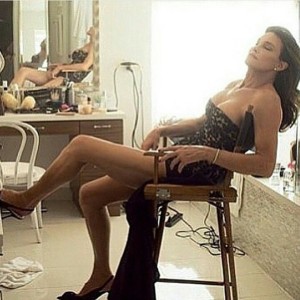 On This Moment Meaning More To Her Than The Day She Won The Olympic Gold Medal:

That was a sporting event; the last few days is about life, O.K., about living your life. About being true to yourself. I was probably at the games because I was running away from a lot of things, O.K., very, very proud of the accomplishment, I don’t want to diminish that accomplishment, but the last few days in doing this shoot was about my life and who I am as a person.

It’s not about the fanfare, it’s not about people cheering in the stadium, it’s not about going down the street and everybody giving you “that a boy, Bruce,” pat on the back, O.K. This is about your life and about who you are. And the last few days have been absolutely amazing, you know, I never thought, you know, that some day I’d be able to do this.

On The Usually Conservative Caitlyn’s Reaction to Her Revealing Vanity Fair Pictures:

I mean these pictures—Annie, Vanity Fair, spared nothing doing it right, and the wardrobe, everything involved with it were just, the people were just great. It was, you know, two of the best days of my life. The pictures came out over-the-top great, you know, and I think people’s reaction when they see it, I was always worried—you never wanted to look like a guy in drag, you never wanted to look like a guy in a dress, O.K. If you’re going to do that, come out, you really have to look the part.

You have to look very feminine, you have to be able to, what I call my presentation is extremely important because it puts people at ease. And if you can do that, O.K., people are at ease, they’re just comfortable being around you. And Vanity Fair, I think that when they see the pictures, the images, and all that kind of stuff, learn your name, people will probably go, My God, why didn’t you do this earlier? 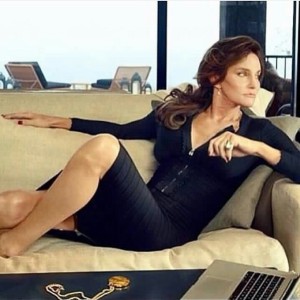 [During the shoot] I had this one time where I had not had a mirror behind me and they put this mirror up behind when I was doing this shoot. I had this rocking black outfit on, formal outfit, and I kind of, from a distance, looked in the mirror and I felt, Oh, my God. That’s the first time I’d ever really seen an image of me, of who I am. I mean over-the-top better than I thought it would ever be, especially at my age. You know, you think it’s kind of over with at that age. And seeing that image was powerful to me, you know, powerful. And I kind of looked at it and said, ‘You know what, this is going to work, we’re going to be O.K. with this’, you know. So yeah, we move forward. I am so excited about the future.

Caitlyn’s family has been more than supportive of her Vanity Fair reveal. The Kardashian and Jenner sisters posted their approval via their social media pages. Even President Obama tweeted encouraging words to Jenner: 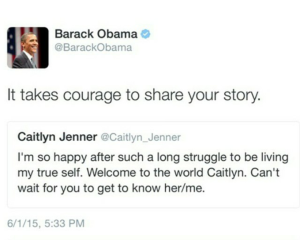 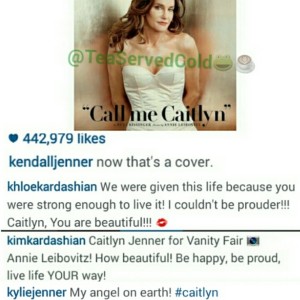 Since the pictures of Caitlyn were released, the majority of responses were positive, encouraging Caitlyn to continue to seek happiness. Even Wendy Williams, who once slammed Jenner for transitioning, praised Caitlyn’s Vanity Fair spread during a segment on her talk show. However, not all celebrities were as accepting. Former Nickelodeon child star Drake Bell was slammed for his “Sorry, I’m still calling you Bruce” tweet in response to the title of Jenner’s spread, “Call Me Caitlyn”. Famed producer Timbaland also indirectly stated the same by posting to his Facebook page that Jenner’s mom named her “Bruce” and that’s what she should be called, as if his mother named him “Timbaland”. 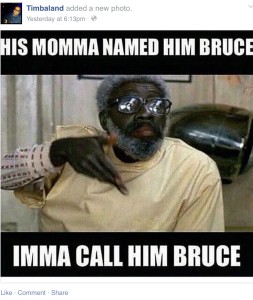 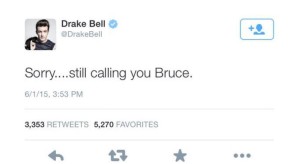 Topics relating to the LBGT community are mainly controversial due to the lack of humanity seen in anti-LGBT people. Again, there’s nothing wrong with disagreeing with one’s life choices, but being hateful, disrespectful and overtly ignorant are never the answers. One of the many responses I’ve seen to Caitlyn’s reveal is comparing her to alleged child molester Josh Duggar, who reportedly sexually assaulted his own sisters, saying Jenner is as “sick and twisted” as Duggar. These types of responses mostly came from Christians, who from their lack of empathy, love and tolerance, showed they were nothing like the Christ they claim to serve.

As one commenter stated, “Judgment Day is real” and when the time comes, many of you may not be in the same line you thought you were going to be standing in. God doesn’t teach hate and if you believe a person is on the route to destruction, Christianity teaches you to PRAY for that person, not shun them.

All of this aside, I PRAY (being that I, too, am a Christian) that Caitlyn is finally free and happy. If she or any of us are unknowingly committing sins through living our lives, I pray God has mercy on our souls. Some of us definitely need His mercy more than others. 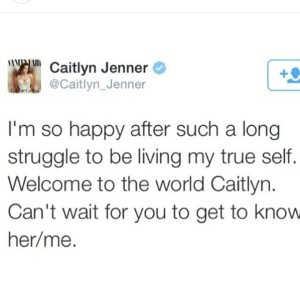 Check out the trailer for Caitlyn’s new docu-series surrounding her transition to be aired on E! Networks: