The tangled lie Sky weaved during her seasons on Black Ink Crew regarding her two sons will come to a head during the new season, premiering December 6th.

In the past, Sky revealed that she gave her two children up for adoption. At the time, Sky was a teen mom and relying on her boyfriend, one of her children’s fathers for support. When he moved out of the state, Sky could no longer afford to care for the children and she gave them up for adoption.

“That’s a very compelling story”, said Sky’s baby father Reese. “But the truth of the matter is, I never left like that”.

As the season’s progressed, Sky’s sad story of an abandoned teen mom would be unraveled as a web of lies from an alleged neglectful mother.

LIE#1: Sky said on the show that Reese was the father of both of her 2 children:

“I had these children to have a family with my first love and our happily ever after did not happen”, said Sky on Reese leaving her with 2 children.

We later found out that story was a lie. Though Sky claimed Reese was the father of her 2 children who left her to raise them on her own, Reese revealed he’s only the father of Sky’s elder son. Reese broke up with Sky when he found out she was cheating and got pregnant by another man just 8 months after their son was born.

Reese grew up with two drug addicted parents. When his mother got clean, she moved to Las Vegas, taking then-teenage Reese with them. Despite Sky claiming Reese left her to care for their kids on her own, Reese says financially, Sky had his support. He also made sure Sky and her family knew where he lived in Las Vegas and could always get in touch with him.

Just 6 months after moving to Vegas, Reese decided to move back to New York to Sky and their son. He returned to see Sky was 8 months pregnant with a second son by another man.

Sky’s second son is 16 months younger than her elder son, Genesis. This story was revealed after Sky’s second baby daddy popped up at her job during filming. Sky refused to film with him, as the man referred to Sky by her nickname “Keke” (her real name is JaKeita). Watch that below:

LIE#2: Sky also lied about her age, said Reese. When he met Sky, he was 17, and both Sky and her mom told him she was 16. He later found out, 5 months into their pregnancy, that Sky was only 14. Reese later moved to North Carolina, became a drug dealer living out of cheap motels, and sent Sky the money he made from hustling. He later decided to take the legal route, moved back to Vegas with his mom and enrolled in Job Corps. It was there that he learned Sky lost custody of their son.

“A lot of things happened that I was not really aware of. I can’t really speak on it because it’s court matters and everything”, said Reese. “I know she lost custody. She ain’t never just give the kids up for adoption.”

Reese said Sky pretended she still had custody of the kids and kept accepting money he sent her to support their son. Whenever Reese asked to speak to their son over the phone, Sky would lie and say their son was at a relative’s house or outside playing with friends.

Sky would later reveal in 2009 their son was living with another family in Abilene, Texas and had lived outside of Sky’s custody since Genesis was around 6 years old. This was in 2009, and according to VH1, Sky was working as a makeup artist during Fashion Week.

Genesis’s life would become just as troubled as his parents, being sent repeatedly between foster homes, sometimes with abusive parents, to juvenile detention centers starting at 13 years old. He would spend months, sometimes years, behind bars, but was able to maintain contact with Reese who sent him money while he was locked up.

As for Sky’s second son, Genesis says his brother lived an equally troubled life. He played in youth football, but later gave that up and began “running the streets”, Genesis said of his brother.

LIE #3: On Black Ink Crew, Sky claimed her sons lived a privileged life and were sent to a rich adoptive family who took the boys on trips to Dubai and enrolled them in sports:

“I had two children when I was in my young teens. I tried to raise them. I got locked up and it just so happen that this beautiful family that wasn’t able to have children on their own, they took my kids in and didn’t separate them”, said Sky.

“My kids are with a beautiful family. They’ve been to countries I can’t even pronounce, gotten shit that I’ll never be able to give them.”

She reiterated the story of the rich family who adopted her sons on the following season, saying

“My mom helped me find a great family to adopt them. It’s not an open adoption, but I do know where they are.”

“The boys are teenagers now and I see them on social media”, said Sky. “They go on trips. They’ve been like, to Dubai. They’ve done so many things as a family and as a unit. I’m really happy with the decision that I made.”

“I stayed out of my children’s lives on purpose. I always said that I would wait til they was 18, but now that I’m at this point in my life, I don’t know if it’s the right thing to do to make contact”.

While in juvenile detention, Genesis was targeted for violence when other detained children made fun of how his mother acted on Black Ink Crew.

“How yould you feel if your mama was running around naked on TV”, asked Genesis.

3 months ago, Genesis and his father Reese sat down for an interview inside Pretty In Ink, the tattoo shop owned by Dutchess, Sky’s nemesis on Black Ink Crew. Watch that below:

Sky said she had one baby daddy. She has 2.

Sky says Reese left her to care for 2 boys on her own. Reese said he financially provided for his children, even moved back to New York just months after his family moved to Las Vegas.

Sky says the adoptive family she found took family trips to Dubai and other foreign countries. Her son Genesis says he was in and out of juvenile detention and stayed with an abusive foster parent. 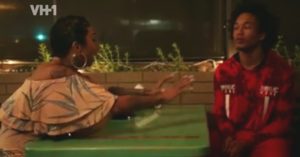 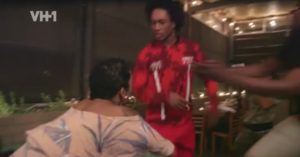 The lies of Sky will come to a head when she and her son, Genesis finally sit down face to face.

Watch a snippet of their explosive reunion below: