Word of Kenneka’s mysterious disappearance spread, and for some, the story of how she went missing wasn’t adding up. In time, the “R.I.P Kenneka” posts on her friends’ pages received hundreds of comments of people accusing the friends of setting up the 19 year old to be murdered. Raven Martin, who claims to be Kenneka’s cousin, told Facebook users Monifah told their family that Irene left out of the hotel room and came back in with some money. She’s seen talking on the phone when someone asks Irene on the phone was she still in the room. Irene replied “yeah”, then handed off the phone to another friend before leaving. Raven also says her family has not heard from Irene since she deleted her Facebook page:

Before deleting her Facebook page, Irene Roberts allegedly revealed Kenneka didn’t walk out of the room and into the hallway. She was carried out by Monifah. One of the men told Monifah to leave Kenneka in the hallway and he would handle it from there after paying her $200. The conversation was captured in screenshots of Irene’s Facebook comments: 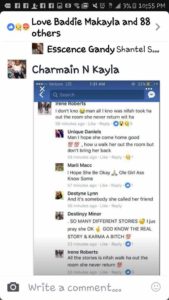 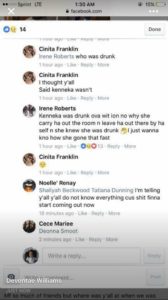 Though an autopsy was completed, Kenneka’s cause of death have not been determined. See social media reactions of Kenneka’s death below: