“They stupid, they in here RAPING HER.”

Kenneka’s friends Irene Roberts and Monifah Shelton told Teresa the 3 of them were leaving the party in room 926 on the hotel’s 9th floor when Kenneka went missing. The 3 of them were standing in the hallway, when Kenneka realized she left her phone and mother’s car keys in the hotel room. The 2 friends went back into the room to retrieve Kenneka’s belongings, but when they returned to the hallway, Kenneka was gone.

So how did the 19 year old stagger from the 9th floor of the hotel to the basement’s construction area, open heavy steel doors and place herself inside, all without initially being spotted on camera?

However, it is on Monifah Shelton’s Facebook Live video that you see pieces of what became Kenneka’s last night. Kenneka’s friend Irene Roberts used Monifah Shelton’s phone to upload the live video to Monifah’s page to create an alibi for the girls. Initially, Monifah didn’t want to be seen on camera, leaning over the phone, then covering the camera to hide her face.

The video was uploaded at 1:36AM Saturday morning.

As the girls talk amongst each other, Irene becomes visibly uncomfortable. All of Kenneka’s female friends are on one side of the hotel room, sitting on a bed. On the opposite side is Kenneka’s body hanging off the bed with 3 men around her. Flashes of Kenneka and the men are seen in the reflection of Irene’s glasses. 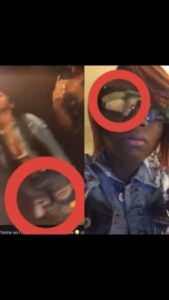 The men are allegedly attacking Kenneka, raping her in front of her friends. As Kenneka starts to cry for help, her friends turn the music up. During the attack, one of the friends asks Irene for a cell phone. Irene says that none of the phones are working due to the poor reception, while still live chatting on Facebook Live. She also uses another cell phone to give directions to the hotel room for other callers. 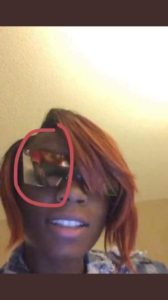 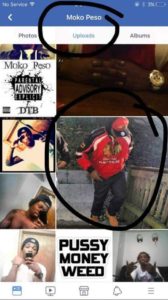 Social media users have come up with several stories of what happened that night. Some believe Kenneka and her friends weren’t as close as they seemed. Despite knowing Irene and Monifah since elementary school, Kenneka had recently fallen out with the girls, each of them posting about “fake friends” and finding out their friend was a “snake” just days before Kenneka’s disappearance. Others believe Kenneka’s friends sold her for sex, telling the men they’d have to pay $200 to sleep with Kenneka. In the video, you can hear one of the women say “it clearly says $200”, allegedly referring to the previously agreed upon price of Kenneka. The girls would then get Kenneka drunk and lay her across the bed. It is even believed that the girls got Kenneka under the influence by placing a date rape drug in her drink.

At one point in the video, one friend can be heard saying “they stupid, they in here raping her”.