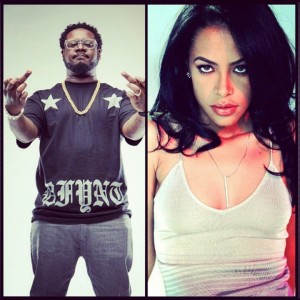 Rapper/Singer/Auto-tune Magician T-Pain is catching heat for his comments on Aaliyah. T-Pain has been doing a series of events where he sings live in intimate settings to prove he can actually sing without the help of auto-tune (he sounds REALLY good, by the way). Recently, while in New York, he played a song on his upcoming mixtape that features Aaliyah’s vocals.

The song is titled Girlfriends and it is HOT!!! T-Pain admitted that he got flack for featuring Aaliyah on his mixtape, saying people felt he didn’t deserve to use the vocals of the late princess of pop R&B. He stated:

First of all, let me just say a lot of people are pissed off about that for some reason. I’m seeing people say ‘he doesn’t deserve her vocals’. So, I’m trying to figure out what the fuck did I do?

So what happened was, they were doing the Aaliyah X album and they came to me for a feature on the album. They had a bunch of sessions of her of unused tracks. So, instead of being a dick and charging the shit out of them, I was like ‘yo, just give me one of the sessions’. They were like, ‘cool, we ain’t gotta pay, right? Alright, here you go’. So it was like a swap. I did a song for her on her album and they gave me one for mine.

And this is where T-Pain puts his foot in his mouth. After playing the song, which you can listen to in the second video, T-Pain says people over exaggerate Aaliyah’s talents and if she was still alive, she would pale in comparison to Beyonce, as most R&B female vocalists do nowadays:

People try to – and I ain’t discrediting Aaliyah in any kind of way, but you know how sometimes when people die – you know how someone’s an asshole their whole life, but when you go to their funeral [people are] like ‘this man was the greatest man in the whole world’ [Crowd boos]

No, I’m not saying Aaliyah [is an asshole]. Nobody’s good enough because she passed. If she was still alive, everybody would be like ‘she’s trying to be like Beyonce’, if she was still alive right now. Now that she’s passed, people are like ‘nobody could be her. Nobody!’ That’s just how I feel and that’s how people are. People just look for shit to talk about.

While some share the same sentiments about Aaliyah’s talents with T-Pain, most agree his delivery was too harsh. I agree he could’ve used a better word arrangement, but I don’t disagree with the hype over Aaliyah’s vocals. Aaliyah was just crossing over from the urban market to the mainstream pop brackets when she passed, so her star power hadn’t yet peaked at the time of her death. The hype over Aaliyah is mostly due to what she could have been, not what she was. We feel ya, T-Pain…