Rapper Xxxtentacion was shot to death this afternoon while leaving a motorcycle shop in Deerfield Beach, Florida.

Xxxtentacion posted 4 hours ago he was in Florida for a weekend charity event. 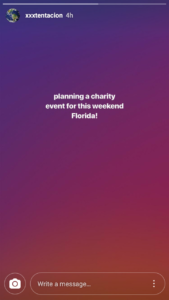 His career had only began in 2014, but Xxxtentacion stayed in the headlines due to controversies outside of his career. He was currently awaiting trial for a 2016 domestic violence case against his pregnant girlfriend, according to TMZ.

I Love You , I’m Sorry For Everything , Forever Jahseh Fucking Forever

rest in peace ??? I never told you how much you inspired me when you were here thank you for existing pic.twitter.com/QU7DR3Ghbw