According to The Shade Room, a woman’s boyfriend is putting her on blast after finding out she’d been with rappers Kodak Black and Future.

The woman in question is a popular makeup artist named Radijah Henry, who says the man hacked her snapchat, presumably retrieving saved videos of her with the rappers. 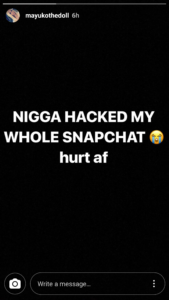 She reportedly spent time cuddling and kissing on Kodak in Miami, then hopped a flight to Dubai with Future. This is also during the time Future is dating Shad “Bow Wow” Moss’s babymama Joie Chavis, allegedly. Watch the videos below:

#PressPlay: Somebody’s mans is putting his girl on blast for laying up with #KodakBlack and #Future ?? She’s apparently been traveling to #Dubai & #Miami with #Future too. (Future is allegedly dating #JoieChavis) #FuturePlayingWhileShesWithKodakDoe ? [SWIPE]

“She chose up. Are you mad or nah?” – The Prophet Omarion.