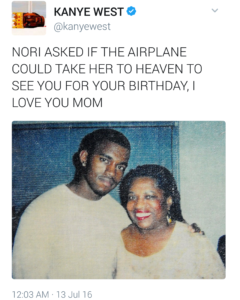 Donda passed away a day after undergoing cosmetic surgery that included liposuction, tummy tuck, and breast augmentation in November 2007. The day after surgery, Donda’s caretakers laid her flat on her back, a position that can cause post-op patients to choke, said her surgeon. Donda died choking on her own vomit after being left laying on her back. The surgeon, Jan Adams, blamed Kanye’s cousin Stephan Scoggins, who was supposed to be caring for Donda post-surgery, but instead left for an event:

“This lady shouldn’t be dead,” Adams told Inside Edition. “All he had to do was sit her up.”

“What’s Donda West’s problem? Her nurse wasn’t there. Her nurse was gone to a baby shower rather than taking care of his aunt”, Adams told Inside Edition.

In previous interviews, Kanye held himself accountable for his mother’s death, saying if he hadn’t moved his mother to L.A., she wouldn’t have felt the pressure to fit Hollywood’s beauty standards, and would’ve avoided the cosmetic surgery that took her life:

“If I had never moved to L.A. she’d be alive,” Kanye said in a 2015 interview with Q Magazine. “I don’t want to go far into it because it will bring me to tears.”

Franklin says Kanye still blames himself for his mother’s death:

“We were all shocked by her death – it was something no one expected. She was so vibrant and full of life and love, then she was gone. It took its toll on everyone but Kanye the most. Kanye believed that had it not been for his fame and fortune in the entertainment industry, Aunt Donda would never have been consumed by Hollywood and tried to fit into that lifestyle and she would never have got that surgery. If you look at pictures you can see that she used to be very much about her naturalness. So he blames himself for that and how do you get over that?”