People are up in arms over the harsh sentcing of four teenage boys (fourth one not pictured). 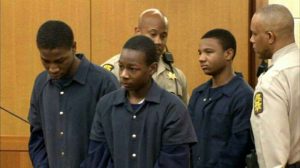 Back in August 2015, the four teens knocked on the door of Mike and Whitney Lash. The couple had just returned home from vacation with their two children. The boys asked the couple for a carjack, but before it could be given, they barged inside the NW Atlanta home and shot Mike Lash in the leg.

Whitney was shot at, but managed to escape with her 6 month old daughter unharmed. Outside of nerve damage in his foot, Mike Lash survived. The boys stole a few electronics, including a laptop.

The sentences: Brandon Smith, 19, was sentenced to life in prison, plus 25 years. The three other teens: Vershawn Smith, 15, Quindarius Slade, 15, and Trequan Sutton, 16, were all sentenced to 18 years in prison.

Should the judge have been more lenient?