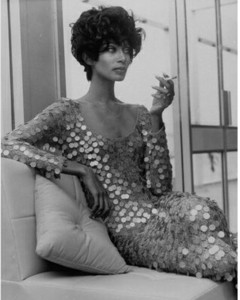 Hailed as the reincarnation of Queen Nefertiti, Donyale Luna rose to stardom in the fashion industry during the racially-tense Civil Rights era.

Born Peggy Ann Freeman in Detroit, Michigan, Freeman was discovered by photographer, David McCabe. McCabe spotted the teenage schoolgirl, who had begn calling herself Donyale Luna, and was captivated by her beauty.

“I was stunned. She was so tall and so slender, and had the most incredible bone structure”, says the English photographer. McCabe invited the then-18 year old Luna to New York and introduced her to Nancy White, the editor for Harper’s Bazaar.

White was so impressed by Luna’s beauty that she immediately had Luna sketched by an illustrator and placed the image on the cover of the January 1965 issue of Harper’s Bazaar. Harper’s Bazaar became the first ever major magazine to feature a Black model as their cover girl.

She was signed under an exclusive contract with Harper’s Bazaar’s staff photographer, Richard Avedon and later graced the cover of the magazine again. His first pictures of the model were used in a six-page spread for the April 1965 issue of the magazine.

The photos were captioned, “as worn by Donyale Luna with all the grace and strength of a Masai warrior”. The Herald Tribune newspaper ran an article on the mag feature, discussing the trials of a Black girl working under the Jim Crow era. This was the beginning of Luna breaking down racial barriers in fashion and media.

See Luna’s Egyptian-inspired feature as Vogue’s first ever Black cover girl on the NEXT PAGE.