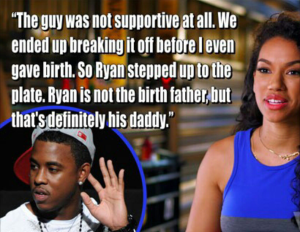 It seems Rachel is more concerned with her image than she is the well being of her son.

Jeremih’s been labeled as a deadbeat dad, but is his son’s mother to blame? A little digging shows Rachel may have purposely kept Jeremih out of their son’s life. On VH1’s Black Ink Crew: Chicago, Ryan Henry, the owner of the 9Mag tattoo shop, showed viewers how he cares for both of the children by his ex Rachel, despite only being the biological father to one. Rachel says after giving birth to Mason, her son with Ryan, her relationship with Ryan ended due to Ryan’s infidelity.

She later hooked up with a celebrity and was impregnated by him. It’s obvious Rachel and Ryan are still in love, and despite Ryan caring for her second son, Rachel shows remorse on the show for getting pregnant by another man besides Ryan.

I did some digging and discovered the celebrity who impregnated Rachel is Chicago-native R&B singer, Jeremih. Their son is 3 year old Canyon. Rachel paints this picture of a happy family with with Ryan playing father to both his and Jeremih’s child, but Jeremih is not the deadbeat Rachel claims he is.

Rachel says Jeremih “wasn’t supportive” during her pregnancy. However, Jeremih showed his fans how excited he was over the birth of his first son. The day of Canyon’s birth, Jeremih tweeted pictures of his son’s delivery, saying it was the best day of his life.

There are also pictures of Jeremih and Rachel posing as a happy family after Canyon’s birth. So it’s obvious their connection didn’t end after the announcement of her pregnancy as Rachel claimed.

With Jeremih’s career taking off and Rachel’s looming guilt for moving on so fast without Ryan, the relationship between Rachel and Jeremih was doomed to fail. After their relationship ended, Rachel ran back to Ryan and made every effort to replace Jeremih with Ryan as Canyon’s father figure. Together, Ryan and Rachel painted the picture of what their family was supposed to be, with Ryan claiming 3 year old Canyon as his son.

Jeremih has been very vocal about Rachel purposely keeping their son away from him to please Ryan. In an interview with Billboard magazine, Jeremih stated Rachel’s attempt to replace him as a father with Ryan had begun to affect his career last year:

“I stopped caring about being Jeremih over the last few months,” he says. “A lot of people don’t know I have a 2-year-old son. His mom wasn’t allowing me to see him, and it was messing with me.”

He also stated he took Rachel to court for custody over Canyon and won his case:

“I was internally unbalanced. But I just got out of that trial and I won.”

Rumors swirled that Ryan tried to scare Jeremih from fighting for custody by having him attacked in between court hearings. Stories were reported of Jeremih getting jumped by Ryan’s friends in Chicago.

Jeremih has also spoken out against Ryan playing father to Canyon. Ryan posted pictures of Canyon on his Instagram page, claiming to be his father and Jeremih commented, saying Ryan’s only role in Canyon’s life is to play his brother’s father. Ryan has since deleted all pictures of himself and Canyon off of his Instagram page. 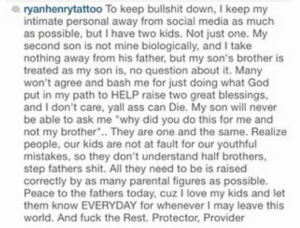 However, for their image’s sake, Ryan still portrays himself as Canyon’s father on Black Ink Crew Chicago, but it’s clear Jeremih isn’t as absent as Rachel made it seem.