As I reported last month, Black Ink Crew‘s Sky’s meet up with her eldest son Genesis would end in blows.

The lies of Sky first unraveled when her son Genesis and his father Reese sat down for an interview and exposed Sky’s fake storyline of a selfless mother who gave up her kids for adoption to a rich family.

Tonight, that long awaited reunion aired and Sky is still steaming from her son’s interview, insulting both her former castmate Dutchess and the interviewer Vivian “Gossip Viv” Billings:

Tonight’s Episode Is Hard To Watch But I Know Using The Platform Of #BlackinkCrew To Bring Awareness To Adoption Is All I Wanted + More.. You’ve Followed This Journey For the Past Few Years & Now Tonight You Finally See Us Reunited❤️☺️?? I Could Give A Fuck Bout A Bum Ass Crusty Lipped HatIn Bitch That Used To Compliment Me Like #Dutchess who Shops Numbers Are doing TERRIBLE (I’ve been Told by 1 of your employees) & That Tries To Stay Relevant via Me Or My Thievin Ass Ex Manager Chase That Her & Ass Kissin “Friend” #CouponViv (remember when You Met Me ☺️ You Almost Cried And wanted a pic ) Linked Up Wit Let Alone A Bum Ass Comment From a Strange Fan…. Thank You For Following My Journey And For The Dm’s & Messages Of Love.❤️ Thank You. I Did This To Show You My Life & Where I Came From.. I Just Thank God For The Glow Up & A Roof Ova My Head….. I’ve Learned To Accept The Things I Can Not Change. #BLACKINKCREW TONIGHT AT 9pm On #Vh1

Vivian, in anticiation for the backlash if Sky’s fans posted this the day of the episode:

Lonnie done took the words right out of my mouth ?!! I’m not arguing on social media with ppl I don’t know in REAL life. #WhoAreYou #MyBlockGameStrong #TheDevilIsBusy #ButImHeadingToTheMasjidTonight #AllahuAkbar #GodIsTheGreatest

Kandace, who was 51 at the time, was arrested after an investigation of the financial records of the Wylie Fast Pitch Softball Association lead back to her, says reports. Kandace plead guilty and was sentenced to 10 years probation. She reportedly offered to pay back the money.

Genesis posted the article as well as screenshots of messages about Genesis being expelled from nearly every school he was enrolled in, showing his life with the Raymond family was far from the privileged tale Sky painted. He also posted his juvenile department records.

Though Sky praised the Raymond family for taking in her 2 kids, Genesis stated in the interview that he’d suffered abuse from his foster father, presumably Kandace’s husband, and when he fought back, he was arrested and continuously placed into juvenile detention centers.

Check his receipts below: 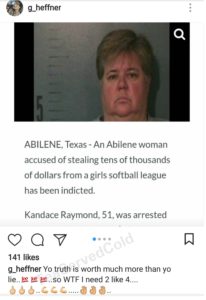 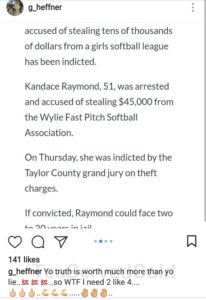 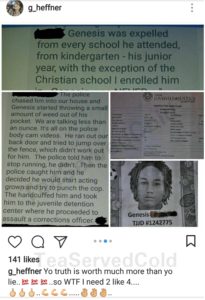 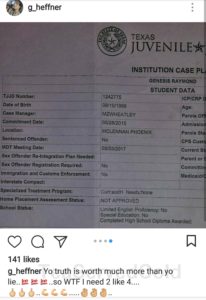