Zell, whose real name is Rodney Lazell Shaw, asked Alexis would she allow her daughter meet the child’s other siblings. Zell says his father has a lot of children with different women, and understands Fetty may want his children to have close relationships. Alexis joked that her daughter’s first outfit will be a shirt that reads “you can’t sit with us”:

“I don’t know if my little baby girl gone even be in that category to sit — baby, when my baby comes out, she’s gonna have her first shirt is gonna say ‘you can’t sit with me'”

Alexis admitted it was a petty joke, saying she would definitely allow her daughter to be around her extended family, only when all parents involved can respect one another.

Masika responded on Twitter, saying “hell would freeze over first”:

HELL WILL FREEZE OVER 1st

Yo vagina will regrow walls 1st!

Yo hoe will be deleted 1st!

You’ll figure out who yo baby daddy is 1st! 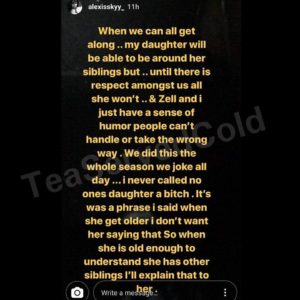 Alexis and Zell also discussed both of them falling out with Lyrica Anderson over Lyrica taking Mister Ray’s side in the LHHH reunion brawl, Zell falling out with Teairra Mari for the same reason, and Hazel-E’s rant against brown-skinned Black women and gay men on Instagram.

Watch the full video below (skip to 9:34 to see Alexis discuss Fetty’s other children):