Republican Senator Bill Ketron of Tennessee has introduced a new bill that would allow drivers to run over protesters who block traffic during demonstrations. According to the bill, drivers would be legally protected from having to pay for any injuries of the protestors due to running them over. Many believe this bill is aimed at Black Lives Matter protesters. 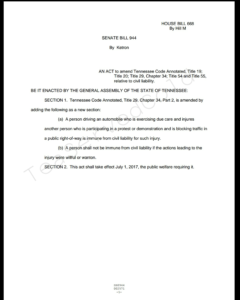 Via NewsChannel9:
A new Tennessee bill addresses protesters who block traffic. Under the proposal, if a person is blocking traffic during a protest or demonstration – and a driver hits them, the protester would not be able to sue the driver in civil court for any injuries. The bill says a driver would not be immune from civil liability – if the actions leading up to injuries were willful.

Senator Bill Ketron (R-Murfreesboro) introduced the bill and said in a statement, “We believe that citizens have the right to protest. There is a procedure for peaceful protests and the purpose of that process is to protect the safety of our citizens. Protestors have no right to be in the middle of the road or our highways for their own safety and the safety of the traveling public.”

Representative Matthew Hill (R–Jonesborough) sponsored the bill, and issued a statement saying, “We are not endorsing anyone running over a person with a car, whether it is protestors or anyone else. If someone intentionally harms a person, they are going to be charged with a crime, period. There is a clear difference, however, between peacefully protesting and lawless rioters in the middle of a public roadway who jeopardize the safety of our families. This is a public safety bill that is meant to protect everyone’s right to peacefully protest and I look forward to seeing this commonsense legislation passed into law.”

Katie Jacobs lives in Chattanooga was one of thousands who did the Women’s March on Washington.

“Oh you’re protesting so it’s your fault if you get hurt,” said Jacobs. “I feel like that’s the attitude some people would take. And that’s not the direction we want to go in.”

Others share that concern. Asyja Pryor is with Concerned Citizens for Justice and attends rallies and protests in Chattanooga.

“I think that is is directly harmful for people who are trying to exercise their first amendment right,” said Asyja Pryor.

President of the Chattanooga Tea party Mark West says when he protested with his group – he never blocked traffic. For him, the bill comes down to law enforcement.

“It’s already a violation of the law to obstruct traffic and obstruct highways,” said Mark West. “When they’re doing that, we shouldn’t have citizens confront citizens. We should have law enforcement confront the violators of the law.”

Safety is something – lawmakers and protesters – say needs to be at the forefront.