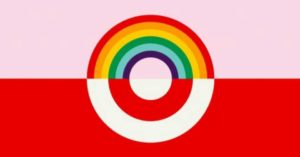 Over 920,000 people (and counting) have signed a petition planning to boycott Target after the store announced it will now allow guests and employees to use whichever bathroom and fitting room that matches their gender identity. Because of this decision, the retail giant stands to lose tens of millions of dollars in profits.

On April 19th, Target released a statement that they plan to allow customers and employees use which ever bathroom and fitting room that corresponds with their gender identity:

“We believe that everyone—every team member, every guest, and every community—deserves to be protected from discrimination, and treated equally.

[…] We welcome transgender team members and guests to use the restroom or fitting room facility that corresponds with their gender identity.

Everyone deserves to feel like they belong. And you’ll always be accepted, respected and welcomed at Target.”

A petition started by the American Family Association (AFA) states Target’s new policy opens the door for pedophiles and perverts to enter the women’s fitting rooms and bathrooms while women and young girls are inside, and prey upon those women and children, so long as the men claim to mentally identify as female.

The AFA also provided its 920,000+ signers with Target’s coprate guest relations office phone number to complain about the new store policy, as well as the link to Target’s official Facebook page to flood their comment section with the hashtag #BoycottTarget.

As extreme as the idea of pedophiles using this new policy to prey on women and children may seem, these incidents have already occurred. 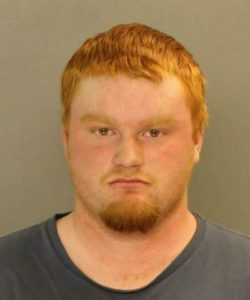 Earlier this month, on April 14th, 19 year old James Thomas Shoemaker was arrested for using his phone to spy on a 10 year old girl as she used the women’s restroom. The 10 year old girl told her mother the Quarryville, Pennsylvania man held his phone over her stall to watch her use the restroom.

Two months ago, on February 8th, a man in Seattle, Washington entered the women’s changing room at Evans Pool and began undressing in front of an underage girls’ swim team.

Later that evening, he entered the women’s changing room again as the girls’ swim team changed clothes after swim practice. When he was asked by guests and the pool’s staff to leave or use the men’s facilities, he stated “the law has changed and I have the right to be here”.

According to the staff, the man did not identify himself as transgendered nor was he dressed as a woman. He wore men’s board shorts while at the facility.

A person’s attire does not define their gender identity, and because of the new law passed by Washington in December, he and anyone else can legally use whichever changing room they desire. The man was not arrested nor forced to leave.

Before Washington’s law could spread its influence across the states, North Carolina nipped it in the bud. Its state governor signed a bill in late March, forcing people to use bathrooms that correspond to the sex listed on their birth certificate.

Mississippi also plans to enforce a law that gives businesses the right to deny services to members of the LGBT community who infringe on the religious beliefs of those businesses.

Allowing transpeople to use whichever facility they identify with is not the problem, says the AFA. The problem with the law is that it’s opened the door for sex offenders to legally spy and/or expose themselves to women and children inside women’s restrooms and changing rooms.

By trying to accommodate transpeople, who only make up 0.03% of the American population, Target has subsequently infringed on the rights of the rest of their customers. That 0.03% of the U.S. population equals around 700,000 Americans who identify as transgendered.

That’s 220,000 people LESS than those who’ve signed the petition and plan to boycott Target. Target stands to lose more money than they’ll gain by enforcing their new “inclusive” policy.

The AFA offered an alternative to Target’s new policy in their petition:

“One solution is a common-sense approach and a reasonable solution to the issue of transgendered customers: a unisex bathroom. Target should keep separate facilities for men and women, but for the trans community and for those who simply like using the bathroom alone, a single occupancy unisex option should be provided.”

Kroger has already followed suit, giving their customers the option to use a third bathroom: a unisex, single occupancy bathroom. Kroger says this new installation is not limited to members of the LGBT community, but to anyone who desires more privacy: 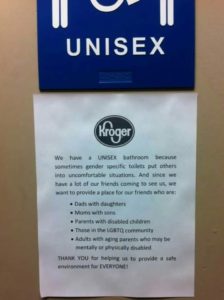 Starbucks, Barnes & Noble, and Hudson’s Bay Company (which owns Saks Fifth Avenue and Lord & Taylor) stands behind Target’s new policy, saying their customers are free to use whichever bathroom of the gender they identify with.

The executives of Apple, Kellogg, Goldman Sachs, and Time Warner cable have also joined Hudson’s Bay Company in demanding North Carolina repeal the law enforcing people to use the bathroom matching the sex they were born with.

What do you think of Target’s new policy and the new law being passed across the states? Are you okay with men and women using each other’s bathrooms and changing rooms for the benefit of the transgendered community?