Of all the evil things Donald Trump has been compared to, Lord Voldemort takes the cake!

After the Republican presidential candidate suggested monitoring American mosques and shutting down immigration of Muslims to the U.S., twitter users compared Mr. Trump to Lord Voldemort, the villian and archenemies of the Harry Potter series. The two do have a fondness for ridding the world of Mudbloods, or in Donald’s case, Muslims. 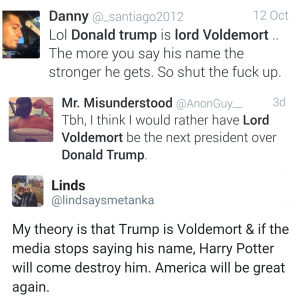 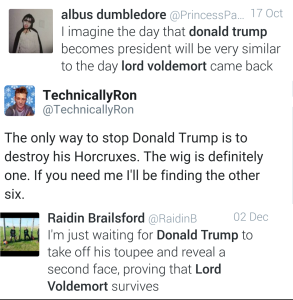 Twitter users even joked his wig may be used as a “horcrux”, a personal object of a Dark witch or wizard where they store fragments of their souls.

Harry Potter author, J.K. Rowling even got in on the joke, saying in the battle of the most evil, Trump’s in first place. 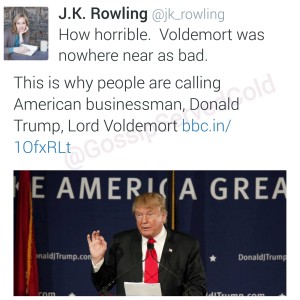 In his presidential campaign against American Muslims, Trump has called for surveillance of American mosques (Muslim churches) and a “complete shutdown” of Muslim immigration to this country.

On November 21st, Trump held a rally in Birmingham, Alabama to announce his plans to monitor American mosques and deport refugees of Syria, comparing Muslims to the Greeks in a “Trojan horse” reference. 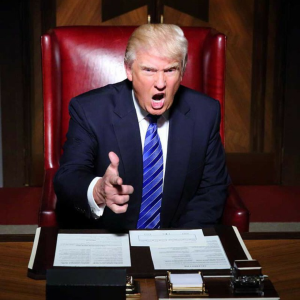 HISTORY LESSON: For those who don’t know, the city of Troy was an undefeated territory in Turkey. After a merciless 10 year with the people of Troy, the Greeks opted to send them a gift: a giant wooden golden horse, as a truce. Inside that horse was Grecian soldiers who waited until the Trojans were asleep to attack the city of Troy from the inside. They were victorious. Trump refers to the Muslim Syrian refugees as the “Trojan horse”, our enemies trying to attack America from the inside.

Trump says the U.S. government has monitored places of worship before, and they’ll do it again once he’s in office. The U.S. government once permitted local officials to monitor African American churches and tapped the phones of Black pastors during the Civil Rights movement. I assume that’s what he’s referring to:

He also released a statement on his website, urging the government to enforce a “total and complete shutdown of Muslims entering the United States”. His statement comes in the wake of the recent shooting of 14 people in San Bernardino by a Muslim couple.

Could the global Muslim population be staging a war against America and her allies? They very well could be, but considering the Christian crusades, the enslavement of Africans, the slaughter of Natives, and the KKK, White Christians have always been the world’s largest terrorist group. Yet, no one has ever monitored their churches nor stopped them from immigrating. In fact, considering the Europeanization of the world, White people would be the most accurate reference of the Trojan horse.

Because of his anti-Muslim campaign as well as his anti-Mexican immigration and pro-African American incarceration campaigns, the White House Secretary, Josh Earnest urged the Republican party to renounce any support of Trump’s presidential campaign, as his comments are “disqualifying”:

The good thing about Trump is his brash and brutal honesty reflects the theories of millions of middle class (White) Americans. The bad thing is, he’s leading in the new national polls as the Republicans’ favorite candidate. Do you know who YOU’RE voting for? 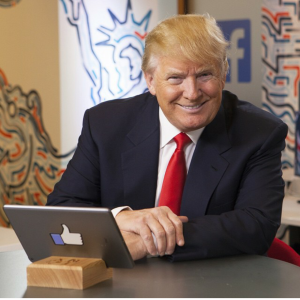