Jen Harley recorded the 32 year old reality star as the two argued over alleged sex tapes in Jen’s phone, starring Jen and an ex-boyfriend. When Jen attempted to walk away, the argument turned physical.

In the video, you can see another woman come from downstairs to separate the two as she begs Ron to stop. Watch the video below:

E! News confirmed today that the two have broken up, but this isn’t the first time. According to the report, Jen and Ronnie have taken their feuds to social media and broken up at least once before.

Yesterday, they both took to social media to degrade each other. See that HERE.

Since returning for the reboot of Jersey Shore, the hot headed TV hunk has slowly fallen from fans’ favor.

During the first episodes, Ron spent his first days bitterly bringing up his ex-girlfriend and former co-star Samantha “Sammi Sweetheart” Giancola, despite being in a new relationship with Jen. He also admitted to still being in love with Sam and brought a random woman home from the nightclub during recent episodes.

All of this occurred while Jen was pregnant with their child. Ron has since apologized for attacking his Jen via Instagram: 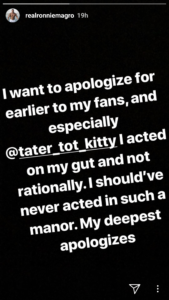 He’s also turned off his comments on his Instagram page.