According to the alleged messages between Fameolous and the 15 year old UK model, she said she met The Game inside a venue where you needed ID to show you’re at least 18 years old to enter. She says she didn’t use a fake ID to enter and Game was told she was 15 years old, but he didn’t believe she was actually underage because she was able to get inside the venue.

During the last few months of her pregnancy (when she was showing), both she and Game “took a break” from social media to allegedly figure out how to spin the story. The Game posted on August 8th that he was taking 60 days off social media to start his “60 days of fitness” regime.

This will be my last post for 60 days. Going to lay off the gram for a hot minute to really focus on my fitness & transforming my body from what it is now to what I really want it to be. A small part of that has to do with toxic people, energy & atmosphere as well, just like some food, people too are bad for your health so you have to rid yourself of that element & start fresh… I also want to try going vegan again, I want my abs to come in, I want to mentally, physically & spiritually be the person that you all look to for motivation that I should be. Not saying I’ve done a bad job thus far, I just know that I can be better so starting today…. I am going to lock in & focus so that 2 months from now I can come back to you proud of myself & more determined than ever to really motivate & help you guys achieve real life goals in & out of our daily fitness posts….. if you have goals & you want to grind with me & really make today your #Day1 as well & keep up with me, do FOLLOW @60DaysOfFitness as well as register NOW by clicking the link in my bio or going to 60DaysOfFitnessChallenge.com today…….. ? @drepic #TheRebirthOfAnIcon #BeWell #ILoveYou – Jayceon #SeeYouIn60Days #TrustTheProcess

However, on July 24th, he posted a picture of his buff body saying that he’d already his “60 day” workout regime.

Ain’t no #MCM bihhhhhh….. This is the final straw: Sorry for the late post but today as it is Monday, I’ve started a new clean diet & a new workout regimen that is going to have me in the best shape of my life !!! I took a break from working out to live a little this summer & now I’m back today & more FOCUSED than ever !!!! This time, @60DaysOfFitness regimen will consist of a grind like you’ve never seen !! I’ve gathered 4 of the best trainers for both myself & you to follow: @b.motiv8ed @agostinafitness @bamfitphysique & @stef_jam for those of you in Europe…. these 4 along with myself are now the #FitFive & we will be rocking with you closer than ever the next 60 days to ensure that you get what you want out of the program… from meal plans, to work out routines for home & gym as well as self-tutorials videos.. feel free to DM any of the #FitFive for questions about anything health & fitness starting right NOW !!!! & if you haven’t done so yet…. register yourself at 60DaysOfFitnessChallenge.com as soon as you’re done reading this post by CLICKING THE LINK IN MY BIO !!!!!!!! This time I am ?% ready……. if you with me, say you with me !!! WATCH THIS SHIT !!!! #60daysoffitness #FitFive #Health #Nutrition #Diet #Lifestyle #StartToday

She says Game has not questioned the paternity of the baby, who was born a few days ago, but has still not seen the baby. The 15 year old said Game agreed to take care of her financially and help her move.

He had to put a baddie on the last flight ?✈️

Both she and The Game have responded less than 24 hours of her conversation with Fameolous getting out. The Game referred to it as a felonious story and says he’s not going to entertain it.

Not here to entertain lies or felonious stories. Laughing at how lame some people are. Stalking others lives, fabricating stories to look like fools in the end. & here I sit……. Focused on my soul, my craft & my children. #TheInternetIsTheDevil #WeGottaDoBetter #TheTruthShallSetYouFree #SeeYallInAnother60Days ? @drepic

The 15 year old mainly responded to the rumor that she lied about her age to sleep with The Game and possibly used a fake ID to get into the venue where she met him.

She also posted pictures of her newborn baby on her Instagram story. 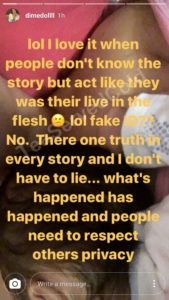 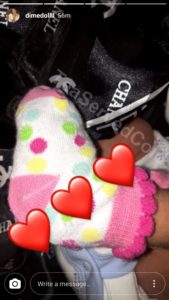 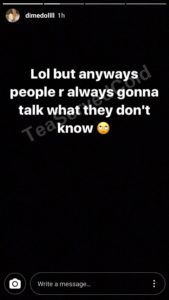 After The Game vaguely denied the story, the 15 year old responded by threatening to release DMs. See on next page.