Insecure actress Amanda Seales went off on Black folks supporting Floyd Mayweather because he’s a Trump supporter. She says you can Google pics of Floyd Mayweather at Donald Trump’s inauguration… 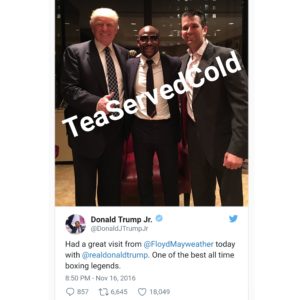 So, I did and came across quotes from a TMZ Sports interview Mayweather did, quoted in Complex Magazine:

“I like everybody,” Mayweather said. “I don’t have nothing against nobody. He’s [never] been mean to me. Donald Trump came out to support me for the Manny Pacquiao fight, and I was appreciative for that.

Floyd says Trump has always been nice to him and supported him, but tweets from Donald during one of Floyd’s fights say otherwise: 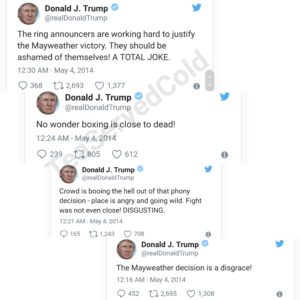 Mayweather wasn’t asked about that on Thursday, but while speaking with TMZ Sports, he was asked what he’ll miss most about President Obama.

And at the end of his TMZ Sportsinterview, Mayweather revealed that, despite whatever backlash he will likely receive as a result of it, he is planning to attend Trump’s presidential inauguration in Washington D.C. next week.

Trump also expressed interest into attending Mayweather’s fight against Conor McGregor, but didn’t want to ruin the “party atmosphere” with his presence, said Dana White, President of the UFC.