“I’ve been making movies with Jordana, who plays the sister of Dom Toretto, for 16 years and I can count on one hand how many lines I’ve had to her. I think that’s pathetic and it’s lack of creativity” – Michelle Rodriguez on Fast & Furious.

Fast & Furious star Michelle Rodriguez threatened to leave the franchise due to lack of respect for her character. The 38 year old actress expressed her disappointment with the franchise via Instagram: 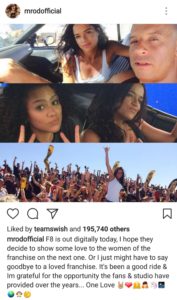 Back in May, Michelle sat down with Entertainment Weekly and discussed how working on the film has been an uphill battle since she stepped on set. According to Michelle, the original script called for her character, “Letty” to be trapped in a love triangle between Vin Disel’s “Dom” and Paul Walker’s character “Brian”:

“[…]Changing Letty, it was tough. I basically had to cry because I didn’t want to get sued because I had agreed to do a feature film and a script. I really didn’t think about it until I was on set. I was like, ‘Wait a minute. They’re really going to make me do this. I thought that they’d figure out by now that this doesn’t seem logical.’

First off, a girl in the ghetto is going to stick with the toughest guy on the block. She would not jeopardize her survival in an urban environment in the name of a good time. It’s just stupid. Imagine if Dominic Toretto found out that blondie boy was messing around with his girl. It’s not logical. You’re not with the most alpha male who will protect you and take a bullet for you and then leave him for a guy who can get beat up by him.

Continued on the next page.