Named “the wealthiest man in human history” by Forbes Magazine, Mansa Musa was the emperor of Mali in West Africa. His name, Mansa Musa, translates to “King of Kings” and his personal net worth was $400 BILLION during his lifetime from 1280-1337.

His Mali Empire was founded by his grandfather Sundiata Keita. While under Musa’s control, Mali became THE RICHEST realm of West Africa, thanks to his salt and gold trade.

He captured the neighbouring kingdom of Songhai and made its major city, Timbuktu, an important trading center in North Africa. This is why so many explorers from around the world came to North Africa, seeking goods and services. 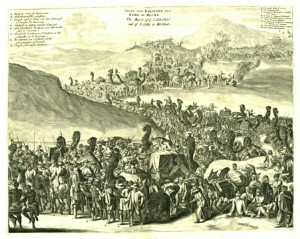 Musa Keita was so flamboyant in his spending, he dressed his 500 slaves in Persian silk and spent so much gold that the value of gold was depressed for 12 years! His most extravagant spending happened during his pilgrimage to Mecca in 1325. He took 60,000 servants, 80 camels carrying 140 kg of gold each, and 500 slaves in their Persian silk on the trip to Mecca with him (pictured above.

This attracted the Spanish and Europeans to Africa’s wealth, and we know what happened after that, after the rest of the world saw how much wealth was in Africa.

The image of the Mansa Musa was immortalized on the Spanish map.

I’d rather see films made about these time periods than to constantly see slave films every year during Black History Month. Show me the Afrikan royalty. Show me where WE really came from. Our heritage didn’t begin on the plantation and I’m tired of Hollywood making it seem like it did. If you look up “Musa Keita OR Mansa Musa”, every picture is of him laced in gold jewelry.