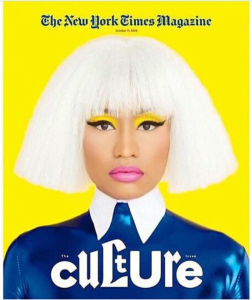 Vanessa Grigoriadis didn’t know when she sat down with Nicki Minaj for an interview with New York Times Magazine, that it would go from entertaining and insightful to enraged. Vanessa, who is a contributing writer for the mag and has profiled celebrities such as Taylor Swift and Katy Perry, ended her first full article for the magazine on a sour note when she implied the Head Barb thrived off drama during the interview.

I’ve got the highlights, including Nicki’s thoughts on the Meek Mill vs Drake and Lil Wayne vs Birdman feuds, what we DIDN’T see at the VMA’s, and how her father’s abusive ways affects her relationships with men today BELOW:

On Her Exchange With Miley’s Cyrus at This Year’s VMA’s:

While onstage accepting her award at the VMA’s Nicki says,

‘‘I saw [Cyrus] just looking at me, with her face screwed up, and I thought, What the!’

Onstage, Minaj next did something exceedingly rare in the commercial music world. She addressed Cyrus with real venom — ‘‘This bitch that had a lot to say about me the other day in the press’’ — and pointed at her with a manicured finger: ‘‘Miley, what’s good?’’ MTV cut Minaj’s mike, but you could see her lips forming the words, ‘‘Don’t play with me, bitch.’’

On Miley’s Cyrus Employing Black Women, But Not Acknowledging Their Struggles:

‘‘The fact that you feel upset about me speaking on something that affects black women makes me feel like you have some big balls. You’re in videos with black men, and you’re bringing out black women on your stages, but you don’t want to know how black women feel about something that’s so important? Come on, you can’t want the good without the bad.

If you want to enjoy our culture and our lifestyle, bond with us, dance with us, have fun with us, twerk with us, rap with us, then you should also want to know what affects us, what is bothering us, what we feel is unfair to us. You shouldn’t not want to know that.’’ 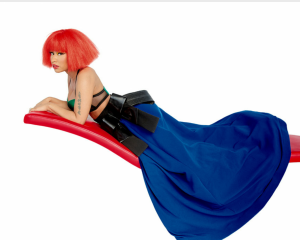 ‘‘Back in the day, in hip-hop, the thick girl was glorified. Now the rappers are dating skinny white women. So it’s almost like, ‘Wait a minute, who’s going to tell the thick black girls that they’re sexy and fly, too?’”

On How Growing Up With An Abusive Father STILL Affects Her Relationships:

‘‘I would always hear him yelling and cursing, always. And it made me feel it was the way to interact, because that’s how I saw him interacting. When I was younger, I thought that the only reason my mother didn’t leave my father was for financial reasons. From early on in my life, I looked at a woman not having her money as the biggest curse.

Since I was 15, I came out of one relationship and went into another relationship. In my relationships, I’ve been told, ‘You don’t have to work that much.’ But I can’t stop working, because it’s bigger than work to me. It’s having a purpose outside any man.’

Now that I’m an adult, I realize that women stay whether a man’s rich or poor. It’s just a weakness.’’

On The Beefs Between Meek Mill vs Drake, and Wayne vs Birdman:

‘‘They’re men, grown-ass men. It’s between them. I hate it. It doesn’t make me feel good. You don’t ever want to choose sides between people you love. It’s ridiculous. I just want it to be over.’’

This is where the interview takes a WRONG TURN. While discussing Nicki’s thoughts on the feuds her male counterparts, the interviewers implies Nicki revels in the beefs:

Vanessa: ‘‘Is there a part of you that thrives on drama, or is it no, just pain and unpleasantness—’’

Nicki: “What do the four men you just named have to do with me thriving off drama? Why would you even say that? That’s so peculiar. Four grown-ass men are having issues between themselves, and you’re asking me do I thrive off drama?’’

“That’s the typical thing that women do. What did you putting me down right there do for you? Women blame women for things that have nothing to do with them. I really want to know why — as a matter of fact, I don’t. Can we move on, do you have anything else to ask?

To put down a woman for something that men do, as if they’re children and I’m responsible, has nothing to do with you asking stupid questions, because you know that’s not just a stupid question. That’s a premeditated thing you just did.’’

Vanessa says Nicki called her ‘‘rude’’, ‘‘a troublemaker,’’and said ‘‘do not speak to me like I’m stupid or beneath you in any way’’.

Nicki ended the interview saying, ‘‘I don’t care to speak to you anymore’’.

Vanessa ended the interview sitting in the lobby of the Trump Hotel after being kicked out of Nicki’s room. Though she tried to apologize repeatedly, Vanessa says Nicki had every right to kick her out, saying she should’ve never offended the “Boss Bitch”. Read the FULL INTERVIEW Here.