That’s the question on everyone’s mind. Rihanna debuted a new song recently titled “Bitch Better Have My Money”. While the song fits Rihanna’s crazy and wild persona, the song’s title and lyrics are much bolder than her usual music. This could be due to the fact that the song’s concept already belonged to another artist… 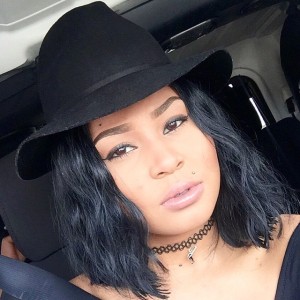 Meet Just Brittany, a Houston, Texas-based rapper and model who debuted her single “Betta Have My Money” nine months ago, before Rihanna’s track debuted. You can listen and compare the tracks BELOW:

Though Rihanna’s version premiered later, it’s definitely gotten more buzz than Just Brittany’s, of course, because she’s Rihanna. Also, because Rihanna performed the track in front of millions at this year’s iHeartRadio Music Awards. Rihanna also premiered the single “FourFiveSeconds” just weeks prior, along with a video. Wouldn’t it make more sense album-wise if Rihanna had performed her first single (which is still fairly new) at the awards show, instead of “Bitch Better Have My Money”? Did Rihanna possibly perform “Bitch Better Have My Money” at the awards show instead so that her version would already hit the airwaves, leaving Just Brittany’s version to fade into nonexistence? Even if Just Brittany pursued a lawsuit and won her case, fans would still associate her song with Rihanna, instead of her.

Smart move, Rih. Rihanna has yet to respond to the accusation, but one of the producers of the track, who goes by the name Deputy, spoke to Fader magazine about his contribution to Rihanna’s version:

When did you first get the word that Rihanna was looking for new material? Being with Roc Nation, you already have an idea of what’s going on. The thing with Rihanna is, you can’t go in doing a record for Rihanna—her range is so wide that you’ll limit yourself trying to focus on it. So I went in and just created what I felt would be dope. When you work from that standpoint, everything comes out dope, so I just did what I felt was dope. Once I did it, I knew for a fact that it would be a Rihanna placement. I even wrote on my vision board, “Rihanna placement, Track number 8.” I named the beat “You Owe Me,” because that’s what I thought it was called. I was like, “This shit is her all day. This shit is fire.”

The sound of “Bitch Better Have My Money” caught people by surprise. How did you know that it would fit for Rihanna? Once that song was done, it was just a feeling, like, I could see her saying some shit like this. Or, this is the shit she needs to be saying. Or, this is the shit that she wants to say. The record is 90-95% me—it’s no shade on nobody, but at the end of the day, the record is produced by Deputy. I been in this game for a minute, so I understand how the game is, and it’s cool.”

Did you help write on the song as well? I produced the record—meaning that I went in and helped arrange the vocals. I was instrumental in the writing process and producing the record to where it’s at now. The whole process started in the studio with the writer, and then once Rihanna got a hold of it then she took it to her level.

Kanye West, Travi$ Scott, and Wondagurl are listed as co-producers, too. I owe Kanye nothing but gratitude—he played an instrumental part in getting the record to Rihanna. Wondagurl’s contribution I didn’t know about, but Travi$ came in and added the part in the second verse where the beat changes. The record is 90-95% me—it’s no shade on nobody, but at the end of the day, the record is produced by Deputy. I been in this game for a minute, so I understand how the game is, and it’s cool.

However this story goes, Just Brittany will lose in the end. Fans already associate the phrase “Better Have My Money” and the song’s concept with Rihanna. Her best bet is to have a tighter management and production team going forward to make sure this doesn’t happen again…