The woman whose face you’ve been seeing all over your favorite celebrities’ social media pages is Jokisha “Kisha” Brown. 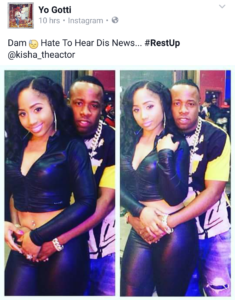 The actress and model from Jacksonville, Florida starred in films such as Queen Pin, Bloodline, Insane In The Brain, and many hip hop music videos. Kisha was a loved and respected entertainer in the film and hip hop industries, known for her grind and being down to earth. 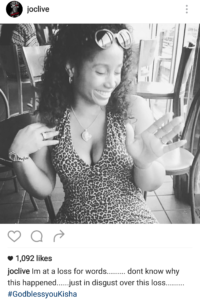 She moved to Atlanta to further her acting career & had recently starred in skits with Love & Hip-Hop Atlanta’s Yung Joc. She was killed a few hours before her birthday and found around 10:15pm by officers on Friday while sitting in her black Mercedes SUV outside a salon in NE Atlanta on Cheshire Bridge Road. 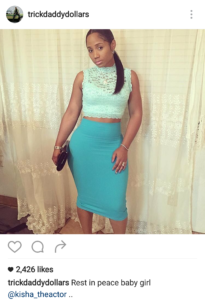 Kisha Brown was still grieving the loss of her brother, Marlon, who was killed back in March. Just a few hours prior to being killed, she posted a picture of herself on Instagram wiping tears away, with the caption “the only thing I would love to have for my birthday is just have a fun, loving dream tonight about my brother, Marlon. My first bday without you…”. Kisha would’ve been 36 today.

R.I.P. Kisha Brown. She’s with her brother and father now.