22 year old Tonie Nicole Wells, who went viral after her husband Barry Wells posted a picture of Tonie’s face tattooed on his back, was found dead at the bottom of her basement stairs with bruising around her neck. Her husband, Barry, has been reportedly arrested for her murder. Police located the body of Tonie after neighbors complained of Tonie’s 21 month old daughter Charlie crying for hours. After allegedly killing his wife, Barry Wells fled the scene, leaving the toddler in the home alone.

As an early anniversary gift, Barry Wells tattooed a portrait of his wife on his back and posted a picture of the tat on social media in September of this year. The picture quickly went viral, being dubbed #RelationshipGoals. Though Barry listed his wedding date as April 10, 2016 on his Facebook page, Tonie lists their wedding date as April 10, 2017, a year after Barry’s listing.

She even posted a video of his proposal, listed March 29, 2017. In the video, Barry pretended to bring Tonie a bag of takeout chicken wings. “I was definitely expecting chicken wings though”, posted Tonie as she opened the bag to find an engagement ring.

Tonie also revealed the two had been on a break prior to getting engaged and had dated other people during the break. Shortly after reuniting, Barry proposed and 2 weeks later, the couple wed.

Their short-lived romance wasn’t without its problems, as reports say domestic violence was a reoccurring issue for the newlyweds. Police had reportedly responded in the past to a domestic disturbance call at Tonie’s home. Some reports allege that Tonie was 8 months pregnant at the time of her death. Tonie’s neighbor, Michelle Ruiz told the New York Post that she’d seen Tonie 3 weeks ago and she looked pregnant. Tonie also reportedly revealed she was expecting her second child on her social media page. Another report alleged Tonie’s cousin revealed Tonie suffered a miscarriage last month during her 8th month of pregnancy due to a domestic dispute with her husband Barry.

However, pictures and video of Tonie over the last few months, including those of Tonie just 3 days ago on Christmas, on her social media account and that of her mother (who still referred to Tonie by her maiden name Lopez), show no visible signs of a late-term pregnancy.

Tonie pictured in the white, from her mother’s Instagram page.

Tonie pictured in white, on the left sitting:

Police were called to the Sterling Place brownstone in Crown Heights that Tonie shared with her husband and daughter Wednesday morning, December 27, 2017. Tonie’s sister reportedly asked police to do a welfare check at the home, saying her sister Tonie was “scared” of her husband because he was “acting funny”. NYPD reportedly arrived at the address, but didn’t get out the car. Multiple 911 calls followed of neighbors complaining of hearing the couple arguing, followed by the sound of something falling down the stairs. More 911 calls came in from neighbors complaining of hearing Tonie’s one year old crying nonstop inside the home.

Around 9:50 a.m. that morning, police discovered Tonie’s dead body, with bruises on her neck, on the stairs leading to her basement. Tonie’s sister showed up to the residence around 1 p.m. to retrieve Tonie’s one year old daughter Charlie. She reportedly told the Daily News that Barry killed her sister. “It was him”, she told reporters. “It wasn’t an accident. It was definitely him”.

Barry Wells was found by police hours later and arrested.

The two NYPD officers who were initially called to do a welfare check at Tonie’s residence prior to her death, but never got out of their patrol car, have been suspended. Had they actually got out of the car, Tonie could’ve still been alive. 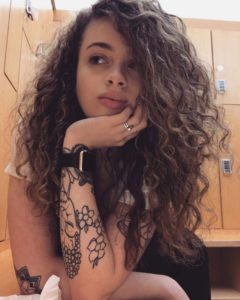